MOSCOW, May 14 (Xinhua) -- Russia has confirmed 9,974 new COVID-19 cases in the past 24 hours, raising its total number of infections to 252,245, its coronavirus response center said in a statement Thursday.

The single-day increase has fallen below 10,000 for the first time over the past 12 days, the center's data showed. 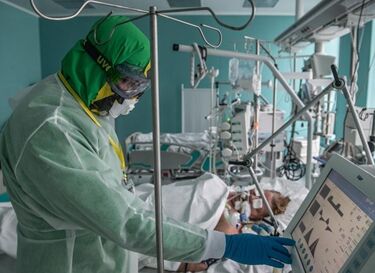 Russia's consumer rights and human well-being watchdog said in a statement Thursday that 259,198 people were under medical observation as of Wednesday.

More than 6.1 million lab tests for COVID-19 have been conducted across the country so far, it added.

The number of officially registered unemployed people in Russia reached 1.4 million, twice as many as in early April, President Vladimir Putin said earlier this week.

National paid leave, which lasted for six weeks to contain the spread of the pandemic, ended Tuesday for the whole country and all sectors of the economy.

Russian airlines will receive 23.4 billion rubles (317 million U.S. dollars) in compensation for losses amid the pandemic, the government announced Wednesday.

The Russian government is also considering paying more than 1.6 billion rubles as an incentive to medical workers involved in fighting COVID-19.