国际英语新闻:Canada, U.S. agree to keep border closed to non-essential travel for another month

OTTAWA, May 19 (Xinhua) -- Canadian Prime Minister Justin Trudeau announced Tuesday that Canada and the United States have agreed once again to keep the cross-border closed to all non-essential travel for another month amid the ongoing COVID-19 pandemic.

The announcement means the bilateral agreement to ban non-essential travel will stay in place until June 21 even as parts of the two countries begin gradually reopening economies.

The agreement, which was first put in place in March for a 30-day period and was extended until May 21 in April, exempts the flow of trade and commerce, as well as healthcare workers such as nurses who live and work on opposite sides of the border. Tourists and cross-border visits remain banned. 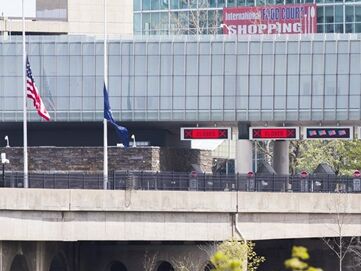 "This is an important decision that will keep people in both of our countries safe," Trudeau said at his Tuesday press conference in Ottawa.

As of Tuesday afternoon, there were 79,070 confirmed COVID-19 cases in Canada with over 5,900 deaths, while the United States has more than 1.5 million COVID-19 cases and more than 90,000 people have died of the disease.

Trudeau emphasized that reopening Canada's border to international travel will be risky as countries worldwide are still working to contain outbreaks and more robust contact tracing has yet to be established.

"We will continue to watch carefully what's happening elsewhere in the world, and around us as we make decisions on next steps," Trudeau said.