ISTANBUL, May 16 (Xinhua) -- The construction of a bridge which will connect Asia and Europe in northwestern Turkey advanced to a next phase on Saturday with the completion of its towers.

A ceremony was held for the installation of the last steel block of 318-meter towers of the Canakkale 1915 Bridge in the Canakkale province. 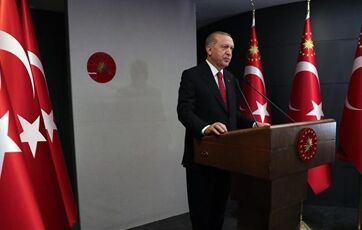 Erdogan said his country's strong transportation infrastructure would be its biggest advantage in a world that would be reshaped politically and economically after COVID-19.

The suspension bridge will have the largest central span in the world when completed on March 18, 2022, according to press reports.